so this is my crappy audition to be a writer for the thoracic fax machine site, captained by sarmad

so i totally found* these guys: rodrigo y gabriela

this song is such a great cold weather song…

*found is an inside joke that most of you wouldn’t get… sarmad seems to find EVERYTHING in our circle, such as shepard fairey and barack obama

**i understand if sarmad doesn’t wanna give me an author account to his site :(

wow — didn’t realize i hadn’t posted this up yet

well i wasn’t much of a fan of this brew… i was hoping for a refreshing mild (in flavor) taste, but it wasn’t like that.

flavor was boring… it wasn’t terrible… just didn’t make me say “ooh that’s nice” — i wouldn’t get this again.

hell, i even tried drinking it outside while cleaning my car (whilst wearing daisy dukes and uggs) — now get that image outta your head!

beeradvocate: B-
me: C

finally… a series that understands the importance of fantasy football: the league —

i got some time to kill before some new thursday tv (including always sunny!) 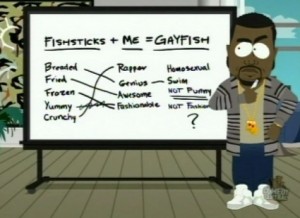 anyway, i found this clip from south park… no it’s not the gay fish episode nor the “naggers” episode… it’s kind of a rip on mormons, which is a running joke at work

anyways… i’m 1-0 in both fantasy football leagues (2nd place in points in both also!)… thank you, mark for reggie wayne and baby sproles — i HIGHLY doubt that i can keep this up (esp with mcnabb getting broken)

oh and wtf is up with the padres? as mugatu would say, “those padres, they’re so hot right now”

lemme know what you think — and more importantly, if anything’s broken…

a couple of things about last weekend… it should be noted that it almost didn’t happen for me — i was on the verge (and as i write this, i think i still am) of getting full-blown sick (not aids, at least)

had to take a half day at work and even got “wellness formula” from jimbo’s (per chaunce) — the pills taste nasty, but i think it might’ve helped (more on this later)

so i meet up with mark, dwight, tim, and mitch at the stone brewery 13th anniversary over at the csu san marcos campus…

this was my first time going to one of these things, and boy… i’ve been missing out. it was such a slick time — my only gripe was that it was effington hot… “mike’s beer cheese” was amazing 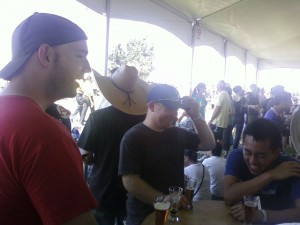 i still think coconut+porter is a great mix! 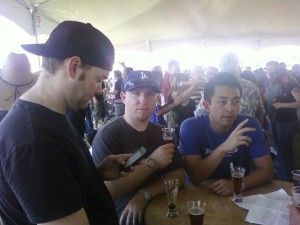 we get a few feet from the place and mark and dwight suddenly want to chase me down and beat me up… wtf? so i immediately channel adrian petersen and i fuckin’ run… i run and i juke… i almost get hit by cars in the parking lot and on my last juke… i hear a loud THUD behind me… i turn around and i see a mangled mess of limbs and whiteness — it’s mark

he friggin curbstomped himself

quickly we get him to a mr. taco bathroom where he washes a little bit — to the disgust of the patrons… as we’re leaving, everyone’s eyes are on the tall white bald bastard and his entourage… i whisper to them, “yea… i kicked his ass”

so then — even tho we were hungry, we decide it’s in mark’s best interest to go to a hospital — i see a “pph” sign (palomar pomerado health — the only reason i know this is because tomlinson does a commercial for them) and we start walking

once inside, we are loud and belligerent… so much so that we get kicked out of the waiting room… (actually, tim and i — the quietest of the bunch… the ones who were half asleep — us)

so we ended up going to the lobby and tim actually does something i never knew he could do — sleep… and i try to take a nap… meanwhile, dwight commandeers a wheelchair (three of them actually) and does a tour de france all around the hospital and around the perimeter

mark finally gets out with 8 stitches in his chin, some scrapes and bruises, but nothing else serious

overall… best stone anniversary ever! (it was kinda like the hangover… but not as funny)

oh so if you wanna see the gash (pre-stitches), click here — very graphic tho — looks like a vagina in mark’s chin… it’s breathing too! PIC (if you don’t wanna click on it, it reminded me of kuato in total recall)

ooh and i found the episode that andy always quotes